Welcome to the first of a series where I post a programming interview question and work through it, posting code and explanations of my approaches, pitfalls, and clever tricks! I may use different languages and compare the results if there are interesting or noteworthy differences, but I will generally use Python due to its brevity and ease of understanding. The focus here is on the algorithm, approaches, and clarity of code rather than any particular code finesse. Send comments or corrections to josh@jzhanson.com.

Note: time and runtime in the context of runtime analysis both mean work, which is how the algorithm takes to execute on a single processor, i.e. sequentially, as opposed to span, which is how long the algorithm takes if we assume infinite processors - span is the longest single branch of the recurrence tree, that is, the most work that has to be done by any single processor among our infinite processors. If the wording is ever ambiguious, I mean work.

Second note: the diagrams are pictures I took with my phone of the diagrams drawn on paper - once I figure out a good diagraming software, I’ll probably replace the pictures. But having pictures of hand-drawn diagrams actually adds a bit of character and humanity to these posts, which I like :).

or, Median of Two Sorted Arrays, or, kth-smallest

Word on the street is that this is an essential question to know for Google coding interviews, and by word on the street, I mean word straight from the mouth of Professor Guy Blelloch in the lecture of 15-210: Parallel and Sequential Data Stuctures and Algorithms at Carnegie Mellon University taught under the School of Computer Science undergraduate program…

Input: two sorted arrays of equal size A and B whose elements are integers (but can be any other element for which there exists a total ordering).

Output: the median element of the array formed when both arrays are combined and sorted - if C is the sorted “union” preserving duplicates of A and B with length n, the median would be the element at index n/2 if n is even and n/2 + 1 if n is odd.

Input: two sorted arrays of unequalequal size A and B whose elements are integers (but can be any other element for which there exists a total ordering).

Output: the median element of the array formed when both arrays are combined and sorted - if C is the sorted “union” preserving duplicates of A and B with length n, the median would be the element at index n/2 if n is even and n/2 + 1 if n is odd.

Input: two sorted arrays of unequal size A and B whose elements are integers (but can be any other element for which there exists a total ordering).

We will tackle 1 and 2 together while 3 is mostly left as an exercise.

A good place to start, in programming interviews, is always to talk through and explore the simplest, often brute force solution. It is almost never the correct solution, but doing so 1) prevents you from sitting there silently for several minutes thinking like a maniac and trying to come up with the perfect solution, 2) fills up the time and helps show your thought process to the interviewer, and 3) helps build intuition on the problem.

The simplest solution here is to combine both arrays into one big array, sort it, and then trivially find the median of that big array. Let n = |A| + |B|. If we use an implementation of arrays that allows appending in O(n) work and O(1) span and a decent (read: asymptotically optimal) sorting algorithm which runs in O(n log n) work and, if we’re picky about the parallelism of our algorithms, has O(log3 n) span cough mergesort cough, then this gives us a total work of O(n log n) and a total span of O(log3 n) span.

This isn’t optimal. Intuitively, it feels like we’re doing a lot more work than we need to; we’re merging and sorting both arrays when we really just need to determine the middle element. Also, do we really need to sort the big array again when both A and B are sorted?

I didn’t mention mergesort up there for nothing: if you’re sharp, then you read mergesort and immedialy thought “Why don’t we just merge A and B instead of appending and sorting?”

We merge A and B a la mergesort by starting a pointer at the beginning of both arrays, comparing the element under the pointer in A with the element under the pointer in B, and advancing the pointer of whichever element is smaller. When we get to the n/2-th element, where n is the sum of the lengths of A and B, we return that one. If we do this, then we actually cut down our work to O(n). However, interestingly, our span becomes O(n). Here, we see the trade-off between work and span in action: algorithms can often become more parallel in exchange for doing more, sometimes repeated, work.

Couple things to note here: we need to check for a couple edge cases, namely, what happens if one or both arrays are empty. Note that if one array is empty but not both, the count_a == len(A) or count_b == len(B) cover it but we need to return None if both arrays are empty. We also have a slightly-awkward loop counter with count_a + count_b < n/2 - 1, which is just to make sure that the final iteration makes the termination condition, which is that count_a and count_b will be on elements n/2 and n/2 + 1, not necessarily in that order. Also, depending on how you in particular code it, you might have to worry about when the arrays are both 1 element.

Now the next step takes a bit of a mental leap. If we think about what we know about the problem, we want to find a specific element out of sorted arrays, except we’re not looking for the element by id but by cardinality, or rank. A good option here to explore, after hearing the words sorted and find, would be some sort of binary search, even just talking about it can show the interviewer that you’re on the right track and can prompt them to give you a hint to set you in the right direction. You could also maybe arrive by the divide-and-conquer paradigm by going through the common algorithmic paradigms. For example, when I’m looking for some smarter algorithm, I first think to see if a greedy algorithm would work, then a divide-and-conquer one, then dynamic programming, then backtracking, and finally graph algorithms.

The picture below should help illustrate the intuition behind these three cases.

Again, if it intuitively seems like we can immediately find the median of two equal length sorted arrays, take a moment to convince yourself why that isn’t true. Writing out a couple of examples might help.

The first if/elif statement is the base case - if both arrays are length 2, then the “median” of each is the first element always, and we could get stuck in a loop where the arrays aren’t actually shortened at each step.

This takes O(log n) work and span because we are chopping off roughly half of our total input size at each iteration, and because we only have one recursive call, there is no parallizibility.

Now let’s take this one step further. What if our two arrays A and B are of unequal length? There’s not actually that much different about our algorithm. We still compare the medians of both arrays, but we have to make some different assumptions about how we can “chop” off parts of our arrays. However, we also have the information about the lengths of the arrays to help us out. Let’s also assume, for simplicity, that |A| < |B|. If A is larger than B, we can just swap the arrays - the logic is symmetric.

We again have a couple cases: 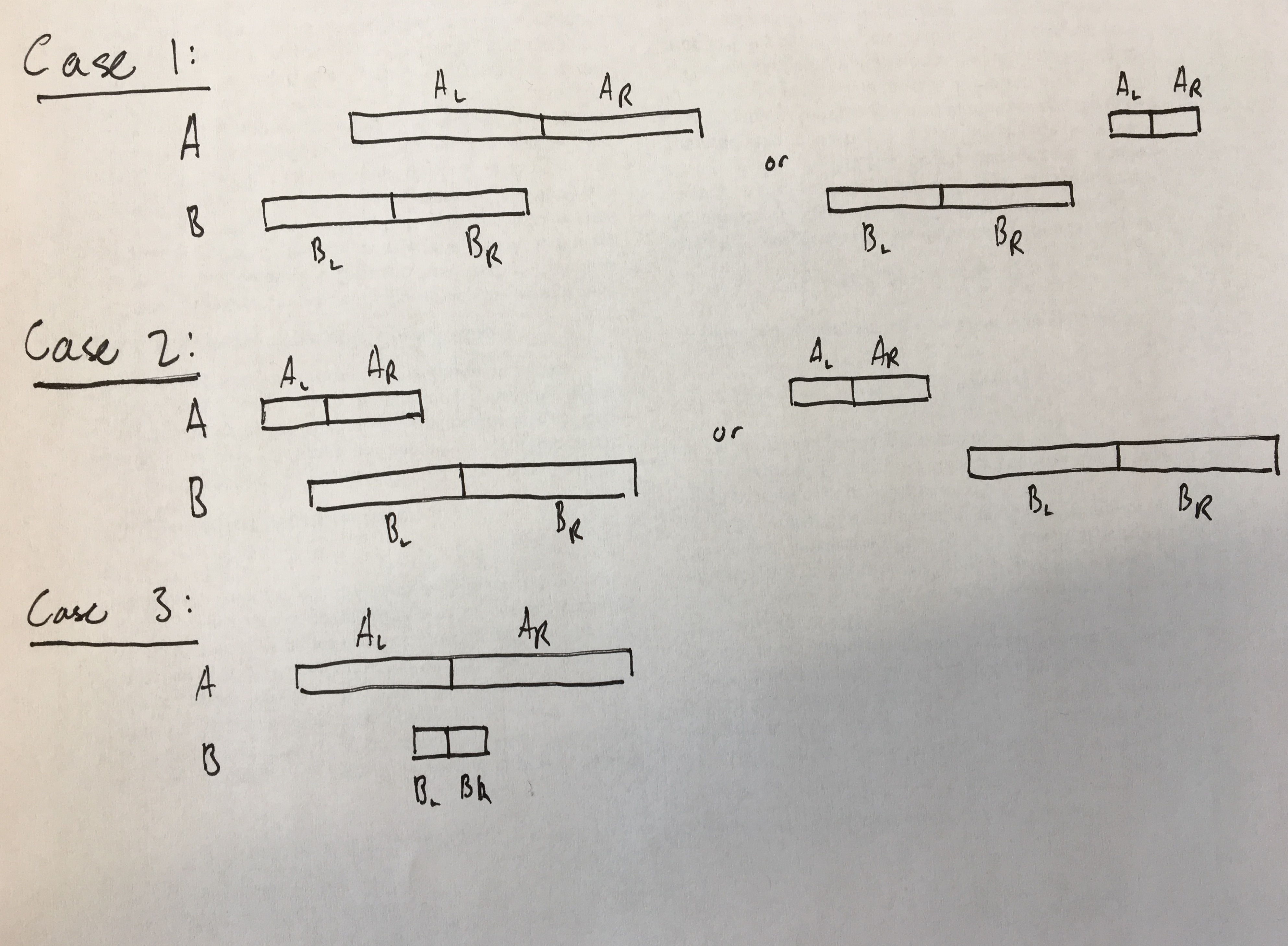 Another reason that interviewers like this problem is that there are a lot of base cases to account for, especially with arrays of unequal length. We can reduce them by forcing A to be shorter than B, of course, but there are still a couple we have to account for.

There’s a lot of base cases that don’t do much but get in the way of the core idea. The rest of the |A| = 2 cases are fairly similar to the first couple. They mostly just boil down to examining cases and then finding the median of more than two elements.

That’s the end of the very first algorithms post, and boy was it hefty, with over 2600 words. I hope this has been helpful - it was certainly helpful for me to get all my thoughts on this particular problem, which have been jangling around in my head for weeks now, down and clear. And it’s definitely a work in progress - I intend to finish writing the code and thoroughly test it and post a link to it on my GitHub. Send any comments or corrections to josh@jzhanson.com. Cheers!

How can we improve this code?

Here’s a quick way to check that Python does indeed create new lists when slicing and reassigning (via passing as an argument) but keeps the same list when passing the original list as an argument.

Running this script, we see the output

Now look at this other test script

Running this script gives us the output

This time, the address of the list x is the same in each recursive call. Not only that, the list x in each stack frame is changing as we change values in x to -1.